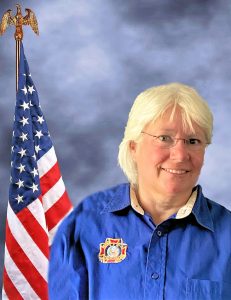 Americanism is a set of United States patriotic values aimed at creating a collective American identity and can be defined as “is an unfailing love of country; loyalty to its institutions and ideals; eagerness to defend it against all enemies; undivided allegiance to the Flag; and a desire to secure the blessings of liberty to ourselves and posterity.”

Throughout this program, we show support for our nation’s veterans, service members and their families, and keep patriotism at the forefront of our lives. It begins by educating others about America’s traditions, displaying the flag, and recognizing others for doing so.

As members of the VFW Auxiliary, we have the knowledge to promote and celebrate our nation’s patriotic holidays and traditions.  So, let us stay true to the red, white, and blue!

It is our responsibility as members of the VFW Auxiliary to teach children about America’s patriotic traditions, and to honor and respect our Flag. Instruct them in the Pledge of Allegiance. Explain to them the “Star-Spangled Banner” and what the colors and numbers of stars and stripes on the U.S. flag represent. Be sure to recognize their hard work with a small patriotic item.

What a great feeling to see our Flag flying. Our Flag is a living symbol of national pride and the freedoms we all hold dear. We need to reach out to our communities and teach others about our Flags history, and respect for our Flag, Flag etiquette and how to properly retire the flag. Ways to do this are:

Recognize businesses and individuals in your community that properly display the flag.

Provide a community Flag disposal receptacle to collect Flags that should no longer be displayed.

By doing these we can educate others about our most prominent symbol.

Invite the community to a Flag retirement ceremony so they can learn how to properly retire the Flag.

A large part of Americanism and demonstrating patriotic spirit is respecting and properly caring for the U.S. Flag. Flag etiquette covers everything from proper display of our Flag to acceptable conduct around this symbol of our nation.

When displaying the flag, DO the following:

When saluting the flag DO the following:

When stowing or disposing of the flag, DO the following:

“On June 23, 1936, a joint congressional resolution designated the last Sunday in September as Gold Star Mother’s Day and it is proclaimed annually by each president. In 2011, President Barack Obama amended the day to “Gold Star Mother’s and Family’s Day.”

The history of National Gold Star Mother’s Day and their families begins with a young country thrown during a great war. Army Captain Robert L. Queissner, whose two sons were serving on the front-line during World War I, created what is now called the Service Flag. The flag was displayed with a blue star to represent a child serving in the military during times of war or hostilities. When a service member died, families stitched a gold star over the blue star. It is a tradition to honor a fallen service member with a Gold Star indicating a family member has been lost while serving during a period of conflict or war in which the United States is engaged. The Gold Star is placed over the Blue Star creating a blue border. The Gold Star represents valor and sacrifice to the cause of liberty and freedom. The Blue Boarder is a faithful reminder that the service member will always be remembered and honored.

The American Gold Star Mothers, Inc. was incorporated in 1929. An ocean often divided families from their deceased sons, as was the case of the founder of the American Gold Star Mothers, Inc., Grace Darling Seibold. While waiting for confirmation of her son’s death, she visited the VA hospital almost daily and made herself useful in the process. Afterward, she continued to visit the hospital and formed the organization that unites gold star mothers still today.” (Source: https://nationaldaycalendar.com/gold-star-mothers-day-last-sunday-in-september/)

How to Honor and Recognize Them

One of the best ways I was taught to honor Gold Star Mothers and Families is if you see someone wearing a Gold Star Pin, or see a Gold Star Banner hanging in their window, ask the person who the star is for, and what is their Stars’ name? Do not be afraid to speak to them about their Star; if you say their name, they are never forgotten. Pierre Claeyssens said it best, “To be killed in war is not the worst that can happen. To be lost is not the worst. To be forgotten is the worst.”

Another thing I was taught when honoring a Gold Star Mother and Family is to refrain from applauding. You must remember these moments are hard for mothers and families as they remember their loved one(s) who are no longer with us. We can honor Gold Star Mothers and Families through ceremonies, luncheons, and teas. We can honor them with a simple thank you, a thinking of you card, a citation, and a moment of silence for their loved one. We can honor them outdoors at a war, veteran, or military memorial site. Times are hard because of Covid, and social distancing and face masks are requirements in many areas, so please honor these mothers and families the best you can.

I challenge you find your local Gold Star Mother’s and Families and recognize them. Let them know that we, as an organization, will never forget.

Patriotic Holidays are a great way to bring the communities attention to your Post and Auxiliary.

Show that your Auxiliary supports patriotism and our Veterans and their families. Use the holidays to promote your programs.

Patriotic holidays are an opportunity to involve the whole family and bring the communities together.

Patriotism calls for all citizens to be reminded of the deaths of fellow countrymen during wartime.  By honoring the nation’s war dead, we preserve their memory and thus their service            and sacrifice.

This day celebrates the official symbol for the United States: our “Stars and Stripes” Flag Day was first recognized by congress on June 14, 1777.

On this day in 1776, our forefathers formed a new nation by adopting the Declaration of Independence.

This day is to perpetuate the memory of those who perished in the attack on America that occurred on this date in 2001.

POW/MIA- September 17th (This is the Third Friday in September)

POW/MIA honors the commitments and sacrifices made by our nation’s prisoners of war and those who are still missing in action. Traditionally on this day it is one of 6 days specified by law which the Black POW/MIA flag shall be flown over federal facilities and cemeteries.

On this day we honor the sacrifices the families have made by losing a loved one in the time of war.

This is the opportunity to publicly commemorate the contributions of the living Veterans.

This is in remembrance of the same date in 1941 that Japanese bombers stages a surprise attack on the U.S. military and naval forces in Hawaii.

National Vietnam War Veterans Day honors a generation of men and women who served and sacrificed during the longest conflict in U.S. history. This date marks the anniversary of when combat forces departed South Vietnam in 1973, even though some troops remained until their final departure in 1975.

Auxiliary members are passionate about bringing attention to former Prisoners of War and those Missing in Action by holding ceremonies to both educate their communities and honor special veterans. One way to honor these veterans and educate the community on this subject is by having a “Missing Man Table Ceremony”. This practice provides a visual demonstration of the significance of POW/MIA Recognition Day. You are encouraged to share this ceremony with youth groups partnering with the Auxiliary.

Find a sample of the ceremony wording and table setup at: vfwauxiliary.org/resources.

Do you know a teacher who deserves this award? Nominate them!

All Post-level nominees, if they win, should provide a one-page resume, up to five pages of documentation of their teaching experience (references, news articles, etc.) and a head-and-shoulder photo of themselves. These items will be forwarded on to the District with the Post Teacher Entry form, nomination form and essay.

What are the National awards?

For more information, instructions for nominations, nomination forms and deadlines, visit the Teacher of the Year page on the VFW website.

The investment that a teacher makes in today’s youth will be the dividends we will all reap from future leaders.

THE FOLLOWING PROGRAMS ARE DEPARTMENT ONLY

Coloring Contest:  This contest is for preschool students ages 3,4, and 5 as well as those in kindergarten. These entries should also include the student’s age. A copy of coloring page is included. All District winners should be received by department chairman by April 15,2022. Make your local and District deadlines early enough to have entries to Department on time.

Poster contest: This is for students in grades 1-3. Poster should be no larger than 14”x22” and white in color. The poster can be done in crayon, coloring pencil, marker or any other coloring agent. The theme is: “Honoring Old Glory and those that fought for her”. Student’s name, school age and grade, Auxiliary name and District number should be on the back. First place winners from District are due to Department chairman by April 15, 2022. Make your local deadline early enough to have entries to Department on time.

Essay Contest: This is for students in grades 4-5. The essay should be typed or legibly written in black ink. The essay will require a cover sheet listing the student’s name and School, and grade. The Auxiliary name and District number should be on back page. The theme is: “Honoring old Glory and those that fought for her.”  First place winners from District are due to Department chairman by April 15, 2022. Make your local deadline early enough to have entries to Department on time.

If you can please report online. If you do not there, is one included with this program. Please report as you do a project, do not wait until you have completed several then report them all at once.

The Department Americanism Chairman must sign and send a copy of the completed Department-winning entry form to National Americanism Ambassador by April 30,2022 for judging.

We have provided a place here for you to download all of the information that we distribute to you through our Program Book and Bi-Monthly Chairmen’s Bulletins.  You will need Adobe Reader, it is a Free program and can be downloaded here  Get Adobe

Teacher of the Year Entry Form